The government and health researchers in that country pursued strategies to control the virus's outbreak and programmed an etiological study. Finlay, the World Health Organization (WHO) announced that SARS-CoV-2 would cause coronavirus disease in 2019 (COVID-19).

The incubation period of COVID-19 is estimated to be 1 to 14 days. The lung is the main organ affected by COVID-19. However, in severe cases, other parts of the body, such as the central nervous system (CNS), kidney, liver, heart, stomach, and intestines may also be affected. As with many other respiratory diseases, the severity of the infection caused by SARS-CoV-2 can vary from patient to patient.

Recent evidence suggests that some SARS-CoV-2 infection cases have been associated with pneumonia and respiratory distress, while other patients diagnosed with SARS-CoV-2 have experienced respiratory failure, septic shock, or multi-organ failure. The mortality rate of infection is reported to be about 2%. The infection of other people during the incubation period and an acute symptom-free phase of the disease is possible.

Discovery
Epidemiological studies of early SARS CoV-2 pneumonia cases have shown that in Wuhan, China, many cases have been in contact at the fish market. The WHO also reported that SARS-CoV-2 was found in samples collected from the fish market. However, it was not yet fully understood which specific animal species carry SARS-CoV-2. It is known that SARS-CoV and MERS-CoV originate from bats as the primary and natural reservoir and are transmitted from civet and camels to humans.

Taxonomy and structure
CoVs are 120-160nm large, enveloped single-stranded RNA viruses, sense-positive, of animal origin, belonging to the family Coronaviridae and the category Nidovirales. The CoVs are divided genotypically and serologically into four groups: α, β, γ, and δ. Approximately 30 CoV species have been identified in vertebrates, while in humans, CoVs from the groups α and β dominate. CoVs belong to the group of β CoVs, and SARS-CoV-2 is the third known zoonotic animal CoV after SARS and MERS viruses, both of which belong to the group of β CoVs.

In humans, there are at least seven CoVs (hCoVs): SARS-CoV-1 (SARS), MERS-CoV (MERS), SARS-CoV-2 (COVID-19, or simply COVID), and the endemic hCoV diseases NL63, HKU1, OC43 and 229E, whose corresponding viruses are designated by the suffix -CoV, as in MERS. For each of these hCoVs and CoVs in general, adsorption and fusion are influenced by spike glycoproteins.

Transmission
The transmission from person to person is mainly aerogenic through the finest aerosols produced when breathing out and speaking (droplet infection). Direct contact with saliva, sputum, or nasopharyngeal secretions is also considered highly infectious. Since the virus has a proven survival time on surfaces of approximately 16 hours, infection via contaminated surfaces is also possible (smear infection).

Pathogenesis and replication
The spikes for SARS-CoV-1, SARS-CoV-2, and NL63-CoV all bind to the angiotensin-converting enzyme 2 (ACE2), MERS-CoV to dipeptidyl peptidase 4 (DPP4), HKU1-CoV and OC43-CoV to 9-O-acetylated sialic acids and 229E-CoV to aminopeptidase N (APN). As determined by Clustal Omega, the spikes for SARS-CoV-1 and SARS-CoV-2 show a high homology identity (76%) but a relatively weak homology with NL63-CoV (30% and 31% respectively). The spikes for NL63-CoV and 229E-CoV have a surprisingly high homology identity (63%), with all other pairwise identities of these seven ranging from 30%-40%. MERS, SARS, and several endemic hCoV diseases appear to confer short- to medium-term immunity against reinfection. Endemic hCoV diseases are seasonal and favor the months of December and January, while MERS spreads mainly in June. The seasonality of COVID and reinfection immunity remain pressing open questions.

The CoV virus envelope has a diameter in the range of 120-160 nm, with each spike glycoprotein at the height of ∼15-20 nm above it. At the distal end of the viral envelope of the trimer spike are three heads, each with its receptor-binding domain, which is thought to be able to oscillate independently between an up (or upright/open) and a down (or lied/closed) conformation. Due to steric constraints, ACE2 binding can only occur in the up configuration. In hCoVs in general, there are three other domains of the spike, called lobes, which are near the heads when pointing up and adjacent when pointing down. These domains occur in the following pattern: The head in chain A (B or C, in that order counterclockwise when viewed from beyond the distal end of the virus envelope) is located proximal to the lobe in chain B (C and A). In the examples of MERS-CoV and SARS-CoV-1, which are attached to the viral envelope as described, the epitopes are also located on the heads.

The putative fusion peptide from SARS-CoV-1 lies centrally between the three heads and is completely blocked when the heads are folded down. After binding, the spike undergoes a dramatic reconformation; the details remain unknown. However, it eventually delivers the 6-helix bundle that is characteristic of a class I fusion protein. It is known that many of the hCoVs, including SARS-CoV-2, enter the cell through endocytosis. In several examples investigated, the spike is covered with an elaborate glycan shield. Both MERS-CoV and SARS-CoV-2, but not SARS-CoV-1, support a furin cleavage site that might promote fusion.

Symptomatology
In addition to clinically completely inconspicuous infections, mild courses of disease with flu-like symptoms and dry cough have been documented to date. In some cases, severe courses of disease with severe pneumonia and cardiovascular symptoms have also been observed. Complications can occur, especially in high-risk patients with previous illnesses such as hypertension, diabetes mellitus, and obesity. In persons over 60 years of age, life-threatening conditions can occur, sometimes with a fatal outcome. In addition to severe damage to the lungs, up to and including lung failure, serious late effects in other organs such as the liver, kidneys, blood vessels, and the heart, as well as permanent damage to the central nervous system have been described.

Immune response and antibody profiles
IgM, IgG, and IgA antibodies are produced during primary infections with pathogens, in this case, SARS-CoV-2. The organism can identify pathological structures of an intruder (viruses, bacteria) and form a tailor-made immune response, the so-called "key-lock principle." These antibodies are differentiated according to the place and time of their appearance in an immune response. IgM and IgA are the classes of antibodies that the body forms first, i.e., antibodies of the acute phase. IgM and IgA are no longer detectable within a few weeks to months after infection.

Antibodies of the G class, i.e., IgG, form the "memory" of the immune system and are usually detectable throughout the patient's life. They are only formed when the acute phase of infection subsides and persist longer in the blood. In case of re-infection, IgA and IgG antibodies are formed very quickly, while IgM antibodies are often not detectable 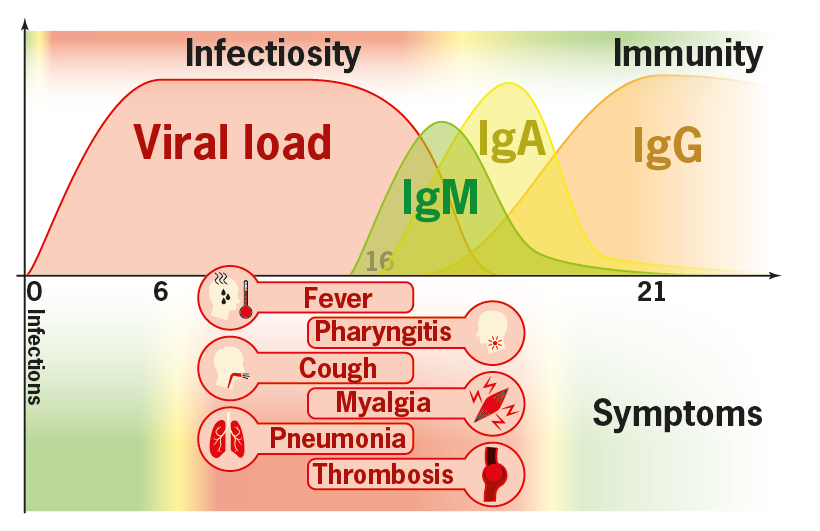