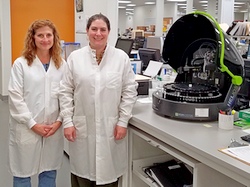 Prior to implementing the HELIOS, HNL screened with ELISA and reflexed all positives to IFA for pattern and titer. “We realize IFA is still the gold standard for ANA, but because we could not automate IFA prior to the HELIOS, in order to keep up with our ever-increasing testing volumes, we had to switch to ELISA. We know that ELISA misses things because the recombinant antigens in an ELISA don’t represent everything that is present in a HEp-2 IFA,” acknowledged Pacella.

Pacella evaluated 4 different IFA systems for HNL and selected the HELIOS for two reasons: “One is smaller footprint, and two is the fact that we did not have to manually transfer the slides from the processor to the reader. Those were the two biggest things.”

The HELIOS significantly improves turnaround time, especially for positive results that need to be titrated. “It’s going to reduce the turnaround time by probably two to three days, and it has greatly reduced the hands-on time for setup,” said HNL Medical Technologist Kelly Buss. “There’s very little maintenance, the instrument’s just very straight forward and easy, and the software is easy to use.”

The HELIOS will also help HNL address increased volumes, as it can process up to 20 slides and 190 samples in one single run. “We are getting four additional hospital clients over the next few months and in order to absorb all that volume without adding staffing, we need to be able to do things more efficiently. This [HELIOS] will absolutely help with that,” said Pacella.

Pacella continued: “I think footprint is one of the biggest things that most labs struggle with, so the smaller footprint is definitely a bonus, and the fact that you don’t necessarily need to be standing there watching it. You can walk away – because it moves the slides over to the camera because it’s integrated. The other systems are separate units, so you have to take the slides off of the processor and then go put them onto the reader.